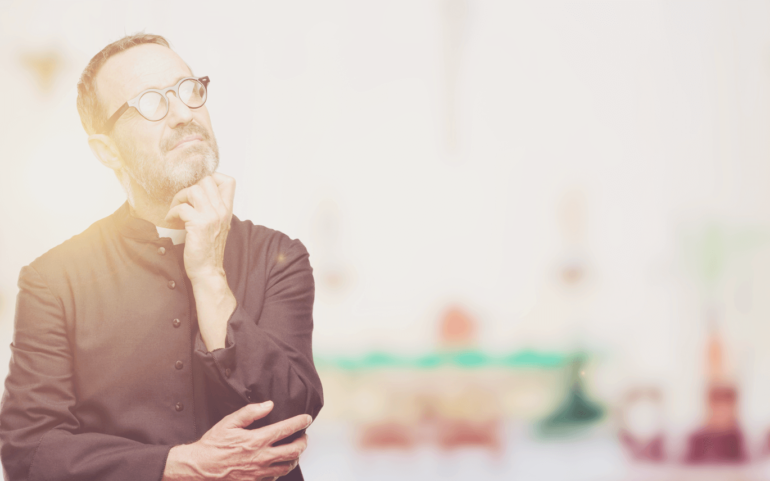 Beginning with Enoch, God has appointed men to stand strong and proclaim truth in a sinful world.

Pastors are not called just to be “church builders,” acting as CEOs who compete with the church down the block. We are called to proclaim the truth of Salvation in Jesus Christ alone to a lost world and to “equip the saints for the work of the ministry.” We are to convey the whole truth of God that is in His Scriptures.

That means teaching about how to act as salt and light to the world.  Jesus said, “You are the salt of the earth. But if the salt loses its saltiness, how can it be made salty again? It is no longer good for anything, except to be thrown out and trampled by men” (Matthew 5:13).

Salt has two purposes: as a preservative and to enhance flavor.  Christians act as salt when they tell the truth in love to a world dying from the lies of Satan and man’s own sinful nature. Nothing can improve life on earth or spur hope of eternity than spreading the Good News of Jesus Christ in all matters.

Likewise, Jesus admonishes his flock to be light of the world: “Let your light so shine before men, that they may see your good works and glorify your Father in heaven” (Matthew 5: 16). Christians must stand out from the world as a contrast to the darkness, showing the love of Christ.

The light part is easier than being salt; doing good works and teaching others to do so is fulfilling and not as likely to encounter resistance.  Standing firm for truth in a hostile culture, however, can be difficult and stressful.  Many churches have chosen to emphasize only good works, avoiding difficult truths.

An effective ministry employs both salt and light in balance.

“I believe the church should be all those things and more. When the pastor preaches the whole council of God, he will become a balanced preacher emphasizing everything that is important to God, and that includes having righteous rulers. The Scripture says: “When the righteous are in authority, the people rejoice but when the wicked beareth rule, the people mourn.” (Prov. 29:2)

Former NFL football great Paul Blair, pastor of Liberty Church of Central Florida and Fairview Baptist Church in Ormond, Oklahoma, is active in Liberty Pastors, a national organization that inspires pastors to lead their flocks on public issues.The group includes Timothy Plan and many ministries across the nation.

“America is in desperate need of another Great Awakening,” Pastor Blair says. “America needs you!”

Pastors must equip our people and lead them out to confront the culture while pointing people to Jesus Christ.  We have been promised that “the Gates of Hell shall not prevail” against the church. This is anything but defensive.

Right now, a Marxist culture war against America is underway, with virtually every institution under attack. In many schools, children are being groomed for sexual anarchy and taught to hate America.

If pastors do not address what is happening outside our churches, the congregations cannot be faulted for thinking that it’s not important.  They look to the pulpit for guidance about what to value and even what is worth fighting for.

The revival in the early 18th Century that history calls the Great Awakening was the signature event that unified America to become “One Nation Under God.” The message that, “ye must be born again” resonated, and the colonists realized that it was not church membership but a personal relationship with Jesus Christ that offered salvation unto eternal life and marked one as a Christian.

The Great Awakening transitioned into the continuing work of the Patriot Pastors. The King of England placed himself above the law, unilaterally violating charters between the colonies and Great Britain. When the colonists sought to print Bibles and tracts for the Indians, the King said ‘no’. When Pennsylvania voted to outlaw slavery, the king said ‘no’. The king rejected the authority of elected offices in America and placed his own handpicked governors over the colonists. He imposed onerous taxes on virtually all business dealings.

Finally, the rumor of a plan to “establish” the Church of England over the colonies and outlaw other religious denominations was one of the last straws. The king placed troops in America even though there was no conflict with the Indians or France. He even placed troops in people’s households. The effort was clearly aimed at subjugating the colonists.

As the King tightened his grip, stripping liberty away, the colonists themselves began uniting as a result of the Great Awakening. Rather than 13 very divided entities, they became ONE nation under God.  The Patriot Pastors were the backbone. The “Black Regiment,” was what the British called those men that ascended to their pulpits in their black clerical robes and stirred the people’s hearts to liberty from tyranny.

“We’ll have no King but Jesus!” was the rallying cry. After a long train of usurpations, as later listed in the Declaration of Independence, the Colonies prepared to declare their independence at what they knew would be a very high cost.  When 700 British troops marched to Lexington, Massachusetts on April 19, 1775 on their way to seize munitions in nearby Concord, about 77 men from Pastor Jonas Clark’s church came out to meet them on the village green. The first battle of the Revolution commenced, with mostly American casualties.

Shortly thereafter, the colonists regrouped at Concord Bridge and delivered the Americans’ first victory.  Ralph Waldo Emerson immortalized that moment in his 1837 poem “Concord Hymn” and its opening stanza: “By the rude bridge that arched the flood/Their flag to April’s breeze unfurled/Here once the embattled farmers stood/And fired the shot heard round the world.”

During the Revolution, the Black Regiment fortified the spirits of the colonists, with some, including Peter Gabriel Muhlenberg, joining the revolutionary army.

Now that America is a self-governing nation, we pray that pastors can peacefully and effectively push back against the forces of evil.  After all, the Pulpit not only spurred the spirit of liberty that led to the birth of this great nation, but pastors have been instrumental in the fight against every social ill. This includes abolishing slavery and child labor; defeating Jim Crow laws and defending civil rights; defending marriage; opposing abortion, prostitution and pornography, and warning about the temptations of drugs and alcohol and the tragedy of addiction.

America is in desperate need of another Great Awakening, a time when America’s pulpits will ring with truth and conviction in such a way that people rise up to throw off the forces of evil subjugation.

We just have to be willing to tell the truth in love and preach the whole Gospel of Jesus Christ.